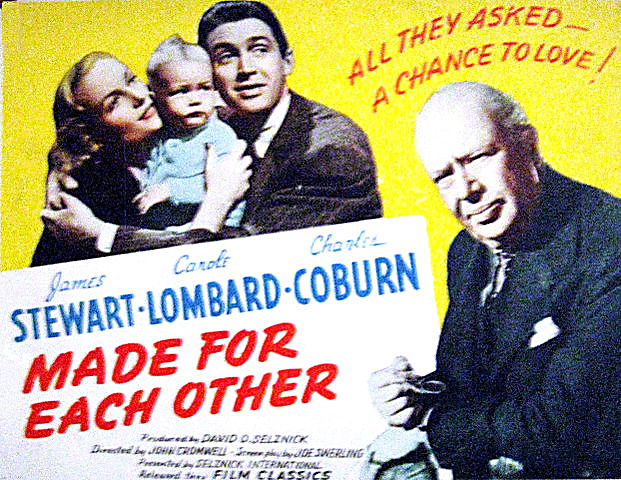 There is a great deal of drama in Made For Each Other. There is a comedy in this 92-minute movie, however, Made For Each Other is not “a comedy.” The phrase “made for each,” other implies that the couple in this movie is so perfectly suited for each other that it’s no surprise when a couple is happily married. However, I’ll leave it up to the viewers to decide if the couple in this movie is truly made for each other.

Although I am tempted to give away the plot, it is not my intention to do so. You just need to be reminded of this 92-minute gem. “Made For Each Other” was made in 1939. What movie made in 1939 wasn’t good? Here are just a few of the other films made in 1939:

No wonder 1939 is considered by many to be the best movie year ever.
It’s my desire that you will find out that some of the lesser-known works are also worthy of your attention too.

David O. Selznick founded his production company in 1935. It was dissolved in 1943. Rebecca (1940) and Gone With the Wind (1939) won Best Picture. Three other of his pictures were nominated: A Star is Born, Since You Went Away, and Spellbound.

As you can tell, Selznick was very picky in choosing what projects to produce. He thought that only cheap or very expensive pictures could make a profit in the movie industry. He had the reputation of producing high quality (and often very expensive works).

John Cromwell was an actor and director on the stage and in the movies.
He started out on the stage in 1912 as an actor. He was a successful Broadway director. In the late 1920s, he moved to Hollywood and was astonished that the movie industry was terrified of the new talkies. Because of his 28 successes as a movie director and sometimes director-actor, he was persuaded By David O. Selznick to direct Made For Each Other.

A few of which I will draw attention to here are:

It’s no wonder, Oscar Levant isn’t known as a composer. Made For Each Other is just one of many movies in which he was uncredited for his music. Anyone who has an appreciation of the golden era of Hollywood knows Oscar Levant as a great pianist – they just don’t know that he was also a very competent composer.

Today, it is almost unthinkable to not give any on-screen credits even for an obscure presence or activity of anyone involved in the making of a movie.

If you need help to get this movie – I can help: As an Amazon Associate I earn from qualifying purchases.

. If you are an Amazon Prime member.