As I have done in my other articles, where I didn’t give a synopsis of the plot, I will try to address the relevance of the movie without summarizing the plot of the film.

Charade the Movie was made in 1963, It was adapted by Peter Stone from a short story, “The Unsuspecting Wife”. The short story was coauthored by Peter Stone and Marc Behm a couple of years before the movie was made. In retrospect, it is hard to believe that these writers had a hard time finding a studio that would produce their story. This story is that good.

Just think, there was a time when sixty percent of the population went to the movies every week.

One of the things that helped make this move a great movie was its director and the directing style he employed.

Although directed by Stanley Donen, this movie definitely has the Alfred Hitchcock directing style. Some have even said Charade 1963 is the best Hitchcock movie that Hitchcock never made. It has Hitchcockian themes:

All of that is here. In fact because of all of these elements and others, I even thought that Alfred Hitchcock was the director. That’s before I looked at the directing credit. My mistake.
Stanley Donen did a superb job and he used many of Hitchcock’s techniques. I invite any of you to leave comments, especially if you want to add to the things I have stated in this posting.

Stanley Donen also was the producer and chose the cast with meticulous care.

Probably the best casting that could have been accomplished

Let’s look at the stars above the tittle: 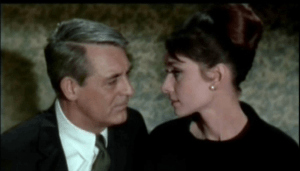 The list of stars continues even after the tittle:

Setting – The City of Love

Everyone knows Paris is the city of love and romance. The Scenery is breathtaking.
One notable and extremely romantic scene takes place on an after-dark river cruise on the Seine through Paris.

Comedy – Another of Hitchcock’s recurring themes

Please note that the director is Stanley Donen,  not Alfred Hitchcock.

I could really put some spoilers in here.

In short, Charade 1963 is complete entertainment that is full of surprises, and I sincerely hope that you will agree.